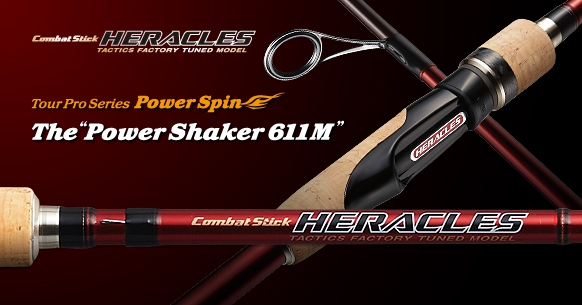 Hercules “Tour Pro Series” is a rod that Morizo ​​Shimizu crossed with the monsters of the world ’s highest tournament / Busmaster Elite series to make fishing wins. Above all, a tough condition, a rod that can be said to be a trump card, is “Power Spin”.

As the name suggests, despite the muscular shaft that has the power to penetrate the hard upper jaw of the big bus, the “Power Shaker 68ML” and “Power Lineup of two “Shaker 611M”. A straight tip that is easy to shake without sacrificing the power of taste, and that fits well into the weak suction of tough baths is unparalleled.

From close combat to super long throw, from shallow to ultra deep, “Power Spin” that overturns the common sense of spinning rods is compatible with all tough conditions.

The Power Shaker 611M is a rod for handling all finesse baits such as jig heads, shake key heads, and drop shots mainly at long distances. This model is suitable not only for the cover, but also for scenes that require more power, such as hooking from a long cast that takes advantage of its length, or hooking deeply.

As a professional who competes on the stage of the world of competition and the world’s highest bass master elite series, Morizo ​​Mizusawa finesse fishing using spinning tackles is an indispensable area for Morizo ​​Shimizu.

“There are many cases where you will encounter situations that can only be achieved by spinning tackles in the Busmaster Elite series, held in various types of fields and under extreme pressure,” says Morizo.