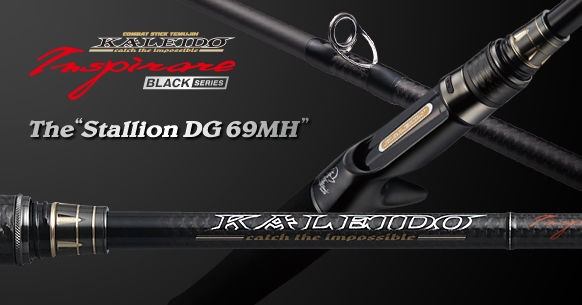 Stallion DG69MH is a super-thick Slow Action Rod that uses a thick-walled carbon (DG = dense graphite) manufacturing method throughout the blanks. The low taper blank has a super-high torque created by making the entire body thick, that is, DG.

As a manufacturing feature, it minimizes the use of four shafts that contribute to weight reduction, and the guide arrangement is closer to the tip, creating a sense of weight. Inspired with a direction suitable for low taper blanks that produces greater centrifugal force in synergy with ultra-high torque thick blank, gains punch head speed when casting, and further penetration when hooking It ’s a dramatic evolution.

Furthermore, coupled with the advantages of semi-micro guide setting that suppresses the tilting of the guide in the torsional direction, it demonstrates its performance using the whole body of the blanks, greatly expanding the range of applications such as general scrolls, jig worms, swim baits. Due to the wide range of lures used from the blank characteristics, long-throw performance, and tenacity, it can be used for hard use in Okapari, where there are many restrictions.

Of course, the unsatisfactory torque that comes from the slow action of the thick low taper is also powerful for big bass hunting. You can always confront the bus while feeling the remaining power.

As a long-length power-up version of the 6-foot 6-inch Cobra DG66M that also uses the DG manufacturing method in the Inspire series, the wide range of use is the Stallion DG69MH that competes for 12 in the series. Stallion DG69MH is a hard-wearing versatile rod with an ultra-high torque created from a thick, low-taper and tenacious blank.